Two beautiful days greeted 37 anglers at Pymatuning Lake this past weekend for the outing to support the Minnow Fund.  Friday night Tim Smith and Phil Ringenbach cooked up perfectly cooked walleye and freshly cut french fries to a gathering of about 25 anglers.  A few beers might have been consumed also.  Saturday morning , final sign up was at the Duck N Drake who provided fresh coffee and a nice donation in support of the Minnow Fund.   Pymatuning Lake gave up some of her fish on Saturday, with anglers catching 9 fish for the day, with one boat getting a triple.  Saturday evening, Tim Smith and Jerry Rice cooked up hamburgers and hotdogs for a hungry crew, who went above and beyond supporting the raffles of a lure board, rod and reel and 50/50 prize.

Sunday was another great day, with 7 fish caught by 2 pm.  The final results were announced at 2:30 at the Duck N Drake with big fish being won by Dave Rankin with a 45″ tank.  For the tournament, Paul Anderson won with two fish, a 36″ and 43.75″ and second place was captured by Bob Basic with a 37.5″ and 38″. Here are the remaining fish caught:

The outing was able to raise over $1,100 for the Minnow Fund, which will be added to the Club’s Minnow Fund account for donation to the ODNR next spring.

Thank you all for the tremendous support.

Below are some pictures from the event.  The one with the special background might have been in reaction to the author of this note checking out the backgrounds on some fish caught the prior weekend.  Bob was puzzled about how long it was taking me to look at his pictures. 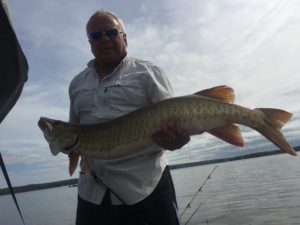 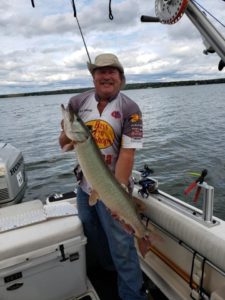 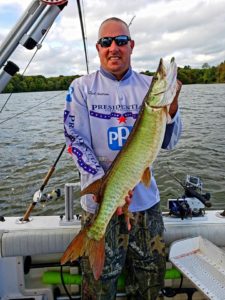 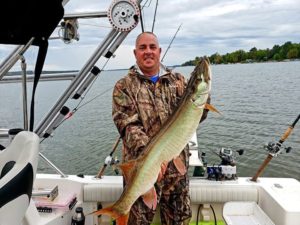 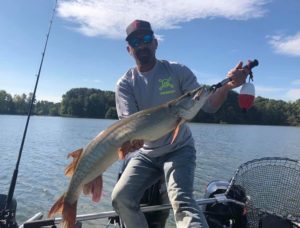 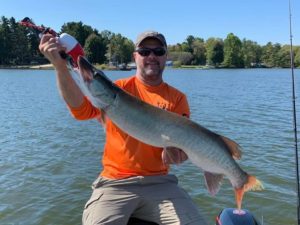 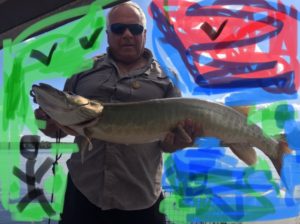 This outing is to be held September 28-29 at Pymatuning Lake! The OHMC is very happy to be heading back to Andover after not being there for a while! This outing is OPEN to the public.
Pre-registration will be held Friday night the 27th at Ohio State Campground site 116 from 6 pm-8 pm. The clubs officers/trustees will serve a free walleye fish fry to those that sign up.
The OHMC is happy to announce that Duck-N-Drake tackle shop has teamed up with us for this event! Registration Saturday morning will be held at Duck-N-Drake, (7038 Pymatuning Lake Rd. Andover OH. 44003) from 7 am-8 am. Birches boat ramp is directly across the street, please park there and walk over so we don’t fill their parking lot.
Fishing starts at 7 am.

Saturday night the club will provide hotdogs and hamburgers from 6:30 pm-8 pm at the pavilion located at the north beach at the causeway. There will be a rod and reel raffle, a 50/50 raffle and a lure board raffle.
Sunday fishing will end at 2 pm. Catches must be reported NO LATER then 2:30 pm to an officer at Duck-N-Drake.
This outing is $20 with an optional $5 BIG FISH. All funds raised go directly to the Minnow Fund! Hope to see you there