Last year Mother Nature smiled on the IceBreaker outing with sunny, calm 70 degree weather, this year she had more of a frown.  Greeting 30 + degree temperatures, strong northwest winds and snow, 28 anglers braved the conditions at Piedmont lake to hopefully catch some prespawn giants.  Even though Mother Nature may have frowned, not all muskie were in such a funk with 9 fish being caught and a few more lost at the boat.

A really big thank you for Chad Harmon and Tim Smith running the tournament and to all those brave souls who came out on a tough day. 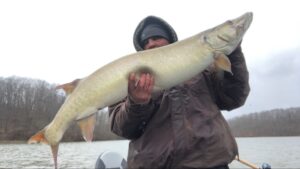