The second annual Minnow Fund Muskie Outing was held on May 3rd and 4th, 2014. On Friday afternoon, the campground started showing signs of the upcoming event by 2:00 as the early birds set up tents and various cooking apparatus’s. Good food would be a theme for the weekend. Upon entry to the park it was immediately apparent that the flood warning which was still active had not been overly cautious. The lake was up about 5 feet and the water in the shallow areas was a witch’s brew of debris, silt, and choppy waves. The spawn, having arrived later than usual, was now over. This was the perfect storm of poor fishing conditions.

Even with such a poor opportunity, we still had 47 anglers sign up for the event and 29 of those anglers chose to participate in the big fish pool. We had persons sign up from OHMC and from MI chapters 16, 18, 19, 23, 41, & 56. We had persons sign up that had never fished an outing of any type and had no club affiliations whatsoever. Door prizes were assigned to random registrations numbers and our winners of those prizes were Bryan Mellon, Dakota Bechter, Mike Reed, Kevin Proffit, and Jen Martinez.

The campground came to life as the deep fryers and burners roared to life. Tim Smith cooked so much good food at the campground that nobody could possibly have left hungry. A few cold beverages washed down the fare for the evening as laughter and good camaraderie filled the air.

Saturday morning seemed to arrive just a touch early for some of us, but soon the griddles were burning and the coffee pot was singing my favorite song. Some fantastic pancakes soothed the crisp morning air as the registration was completed.

Now it was time to attempt to launch the boats and that was no easy chore. The parking lot at the old marina had water in it and the concrete walkways by the ramps were completely submerged. Most anglers traveled to Cabin Bay and to my knowledge, nobody had too many problems getting launched. The casters casted and the trollers trolled and the muskies rejected most of our offerings. The radio silence meant that either we were all catching fish or nobody had anything to report. Unfortunately it was the later.

By 1:00 it was time for a shore lunch and as the anglers filed in, the rain started falling. Fortunately, we had the shelter house and a wonderful group tent that had been brought and set up by Kevin Proffit and Rich Daniels. The raffle table opened up as we sold tickets for a lure board, rod & reel combination, 50/50, and a general raffle. Everyone seemed to enjoy the food and break from the harsh conditions that were present on the water. Greg Them of Xtreme Muskie Lures had baits for sale and offered them at a price of two for $25 with $5 from each sale being donated to the Minnow Fund.

We chased fish for the balance of the day and for the first half of Sunday and most of us loaded the boats up with our tails between our legs. The raffle table opened up for the final sales as the fish that had been caught were reported. The tally sheet showed that a total of 5 fish were caught, although I’m fairly sure that there was at least one fish that was caught but not reported.

Check out the pictures in the Photo section of our site.

The 53nd Ohio Huskie Muskie Clubs Annual Awards Banquet was held on March 22, 2014 at Prime93 in Akron, Ohio.  The attendance was up significantly compared to recent years and all those in attendance were treated to good food, friends and laughter.  A total of 99 OHMC members and 10 vendors were in attendance.  We had a casting competition and a trivia contest as extra entertainment again this year.

During the business meeting, members voted on the lake nominations for our 45th Annual Open Summer Contest in 2015.  The winner was Piedmont Lake, with the event to be tentatively held on July 11th and 12th pending park approval.  Elections for officer positions were held during the business meeting.  The OHMC officers for 2014 are as follows; Paul Anderson, President; Jeff Ferjutz, 1st Vice-President; Rick Simpson, 2nd Vice-President; Tim Smith, Secretary; John Ringenbach, Treasurer.  We also added two new trustees, Mike Reed and Phil Ringenbach.  There are currently several vacancies on the board of trustees, so if you are interested, we could sure use the help.  Please see any trustee or officer.

Before the banquet meal started there was a pause for a moment of silence for all the club members whom had passed last year and for those individuals that are in the military and may be away from their families.  Next, we took a moment for a blessing of the meal by club member Mary Jill Harshey.  The food was very good with a buffet that included Beef Au Jus, Lasagna, Baked Lemon Herb Chicken, Green beans, Bean Salad, Garden salad, and Sourdough Rolls.   We all had a great time and lots of fun with the fish stories that were being told.

Everyone that attended received a custom bait created by Greg Them of Xtreme Muskie Lures as a  door prize.  A special thanks goes out to all the vendors that set up a booth at the banquet this year, and also all of the Ohio Huskie Muskie Club supporters who donated door prizes and prizes to raffle at this event.  Please patronize these companies as they make our events a success.  The following were supportive of raffle and door prizes.  Xtreme Muskie Lures,  Pearson Plugs, Musky Musky Fisherman Specialties, Jerry Rice, Jimmy’s Bucktails, Ziggie Custom Musky Lures, Marshall Custom Tackle, and Smokin Bones Baits.

H.E. Pooch Curry Award   (Largest musky by length only) was presented to Chuck Harmon with a 50.75” musky caught at Salt Fork Lake.

The Matthew Smith Memorial awards for juniorswere as follows:

Boys Release—Charles Neville with a 45.00” fish.

Greg Bozik with a 49.75” muskie caught at West Branch.

King Release —Chuck Harmon with a 50.75” caught at Salt Fork.

Queen Release –Linda Hannen with a 49.00” caught at Piedmont.

Paul Anderson – OHMC member for his dedication, and continuous support of the OHMC.

Alicia Anderson – OHMC member for her dedication, and continuous support of the OHMC.

Chuck Land caught six muskies with a total of 73.00 points in the four club events. 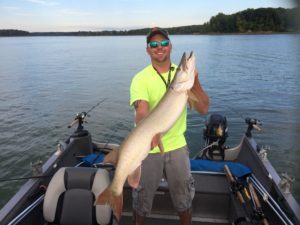 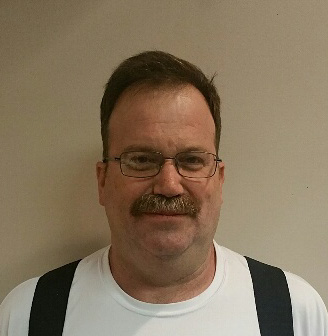 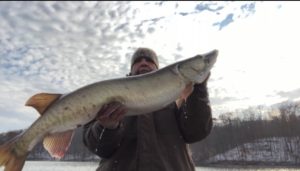 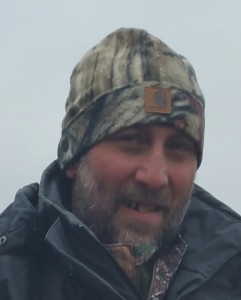