Wow, what a day.  Started out a little cool with patches of drizzle and rain but then the sun came out for a beautiful afternoon.  A great turnout of 56 anglers seeking to unlock the magic of Leesville Lake were ready to go at 7 am.  Jason Basic foretold what was to come by landing an impressive 49 inch giant early in the morning. In fact too early in the morning, just one half hour before the tournament was to start.  We also had some exciting first catches……Colton Harmon got his first muskie with a 43″ and Maggie Butara, our Social Media Director, was thrilled to land her first 10 minutes into the event, a solid 39.75″.  By the end of the day, a total of 18 muskies were registered for the event, but there were also a few fish caught that were not registered.  The fish were clearly active Saturday.  When it was all said and done, after a nice long nap midday, Rick Simpson managed to be awake long enough to catch the big fish of the tournament, a hefty 46″ beast.   Here is the complete list of fish and a few pictures.  Check out our Instagram page and Facebook for more pictures as they are sent in by our anglers.  We are nearing 1,000 followers on Instagram and will have a prize package to be awarded when the magic number is reached….so if you are not already following us, jump on board and you could win some cool lures and a selection of products from Cleveland Fishing Company. 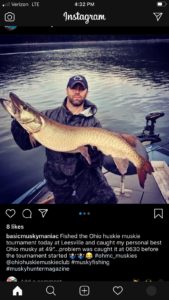 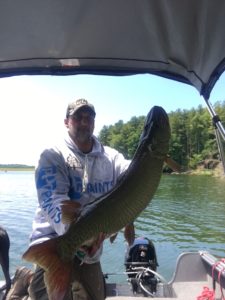 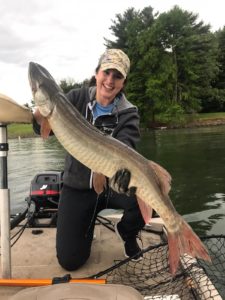 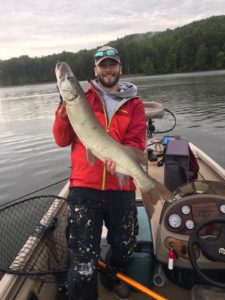 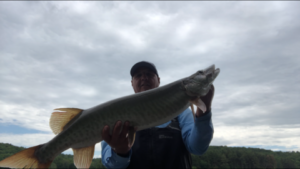 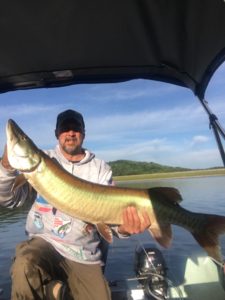 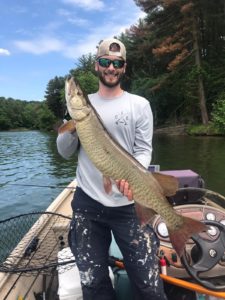 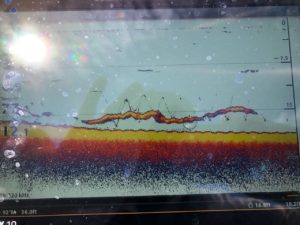 It’s time for the Leesville Lunge Fest, this event will be held on Saturday, June 13th from 7 am to 5 pm.  All fish must be turned in no later than 5:30 pm.  Registration will be from 6 -7 am at the launch ramp south of the dam.  Entry is $10 with an optional $5 Big Fish pool.  Longest muskie by length wins this event.  During registration and exit announcements, social distancing is expected.  Please abide by our state’s recommendations and let’s get out and fish!

The Ohio Division of Wildlife has taken a different approach to meeting our annual stocking needs for muskellunge during 2020 due to the current COVID-19 pandemic. Our goal of stocking 19,890 advanced fingerlings in nine reservoirs has not changed, but the way we need to go about it has.
This is obviously not a typical year and we have had to adjust in many ways. In a typical year, Division of Wildlife crews net adult muskellunge from Leesville Lake during early to mid-April to take and fertilize eggs for part of our muskellunge production. Then, additional fertilized eggs are obtained the Minor Clark State Fish Hatchery, operated by the Kentucky Department of Fish & Wildlife Resources (KDFWR), to augment our needs. Unfortunately, we could not collect eggs from Leesville Lake this year because the time period required to do so overlapped with the peak of COVID-19 ramping up, and, KDFWR did not take any muskellunge eggs this year for the same reason. Similar situations have occurred in Michigan, Wisconsin, and Minnesota.
Fortunately, the Pennsylvania Fish & Boat Commission believes that they may be able to provide our fish hatcheries with 55,000 2-3 inch fingerling muskellunge this June. These fish would be grown out in our hatcheries to advanced fingerlings to meet our annual stocking goal this fall. We are very appreciative of this generous offer and are hopeful that this approach works out. Fish production happens one step at a time and we will keep you posted as efforts progress.
Thank you for your understating and continued support. If you have any questions, please feel free to contact me directly.

Thank you to the ODNR for helping insure the potential of a great muskie fishery on Lake Erie.   Their hard work deserves more recognition for all that they do.  The muskie destroyed was most likely in the four foot range.

“This type of behavior is unexpected and unacceptable,” said Matt Leibengood, Law Enforcement Supervisor for the Division’s Lake Erie Enforcement unit. “I am proud of our investigators and officers working to protect Ohio’s natural resources.”

Division of Wildlife investigators observed and recorded Szuch employees intentionally injure a rare trophy-sized muskellunge after it was removed from a commercial fishing net in western Lake Erie. Employees were also observed removing numerous gar, a native fish important to the ecosystem, from commercial fishing nets and then breaking their spines and tossing the carcasses into the lake.

If convicted, Szuch Fishery faces maximum penalties of $55,000 and a 30-day suspension of its ability to fish with commercial gear and to handle commercial fish or other fish at wholesale. The individuals face a maximum penalty of $750 and 90 days of incarceration.

Anyone can report a wildlife violation through the Turn-In-A-Poacher (TIP) Program. Wildlife violations can be reported anonymously via phone call or text at 800-POACHER (762-2437).

From our President, Jeff Ferjutz:

After discussion with the Board and with following the Governor’s protocol, I’m sorry to inform everyone that we are canceling the event at Peidmont on March 28th. This event could possibly be added later in the year, joined with an open event this year, etc. right now, we have to think of the safety of the anglers and everyone involved.
We will keep everyone updated. Thank you and everyone be safe!